There are many options for authentication when SSH‘ing into a machine. The most common (and least secure) is simple password authentication. You can make this secure(ish) if you can guarantee that your users are going to use non-trivial unique phrases, from machines free of keyloggers; easier said than done. A better method is to require key based auth. If you do that, you need to guarantee that your users secure their keys and password protect them, again with non-trivial unique passphrases. I’m going to talk about a third option, which is to use smart cards.

First of all, to whet your appetite. The hardware I use: 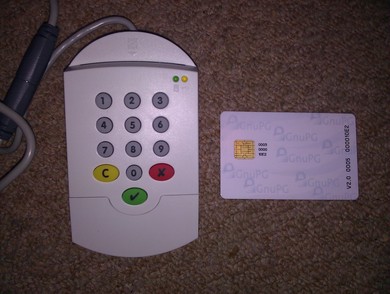 The standard way of generating and using SSH keys is to use the ssh-keygen command from the OpenSSH package. This generates a keypair. You append the public part of the key to the ~/.ssh/authorized_keys file on the destination machine and keep the private part of the key, password protected, on the source machine. With smart cards it is different:

Once you’ve reached this point, the private part of your ssh/authentication key exists only on the smart card and can not be read by you or anyone else. A stub referencing the subkey is left behind with your on disk keypair. Whenever you try to use that subkey, the system will request that you insert the smart card.

Install the gnupg-agent package. One of the commands it comes with is called “gpgkey2ssh”. Running this command with the key id of the authentication subkey will output a key which you can add to ~/.ssh/authorized_keys on any machine which you want to SSH into. Because my own key is on the public keyservers, you could technically give me ssh access to a machine by running the following simple commands:

Now, how do we get the OpenSSH client to use the smart card for authentication? Typically, OpenSSH uses the ssh-agent application to handle authentication. gpg-agent has been designed to speak the same protocol as ssh-agent though (when enabled). If you stop the ssh-agent process, and add “enable-ssh-support” to ~/.gnupg/gpg-agent.conf then the OpenSSH client should start talking to gpg-agent instead. Once you’ve done this, if you run:

You should see that the key you generated previously is mentioned (only when the smart card is inserted).

And now you’re done. If you ssh in to a machine which has your public key, you will not be prompted for your password. Instead, you will be asked to type in your pin on the smart card readers pin pad. The pin pad of my USB smart card reader makes a loud beep noise each time you press a button. This is not ideal in some scenarios so in these cases I use the keyboard instead. This is possible by adding “disable-keypad” to ~/.gnupg/scdaemon.conf.

If your client machine is running Windows and you’re using Putty, there is a drop in replacement for “pageant” at http://smartcard-auth.de/ssh-en.html which does the same authentication task that gpg-agent provides in the Linux environment. Putty by default attempts to authenticate using “pageant” if it’s available, so as long as you make sure it’s running, and as long as your Windows gpg installation has a keypair with the subkey stub, it will just work. When putty prompts you to enter your pin, it gives you the option of using the hardware pin pad, or typing it in at the keyboard.

Once you have key based authentication set up, you might want to disable password authentication altogether. You can do this by setting “PasswordAuthentication” to “no” in /etc/ssh/sshd_config on the server side. You might still be wondering what the point of using smart cards over standard ssh key authentication is. There are a few advantages: